Reducing the risk from Himalayan tsunamis 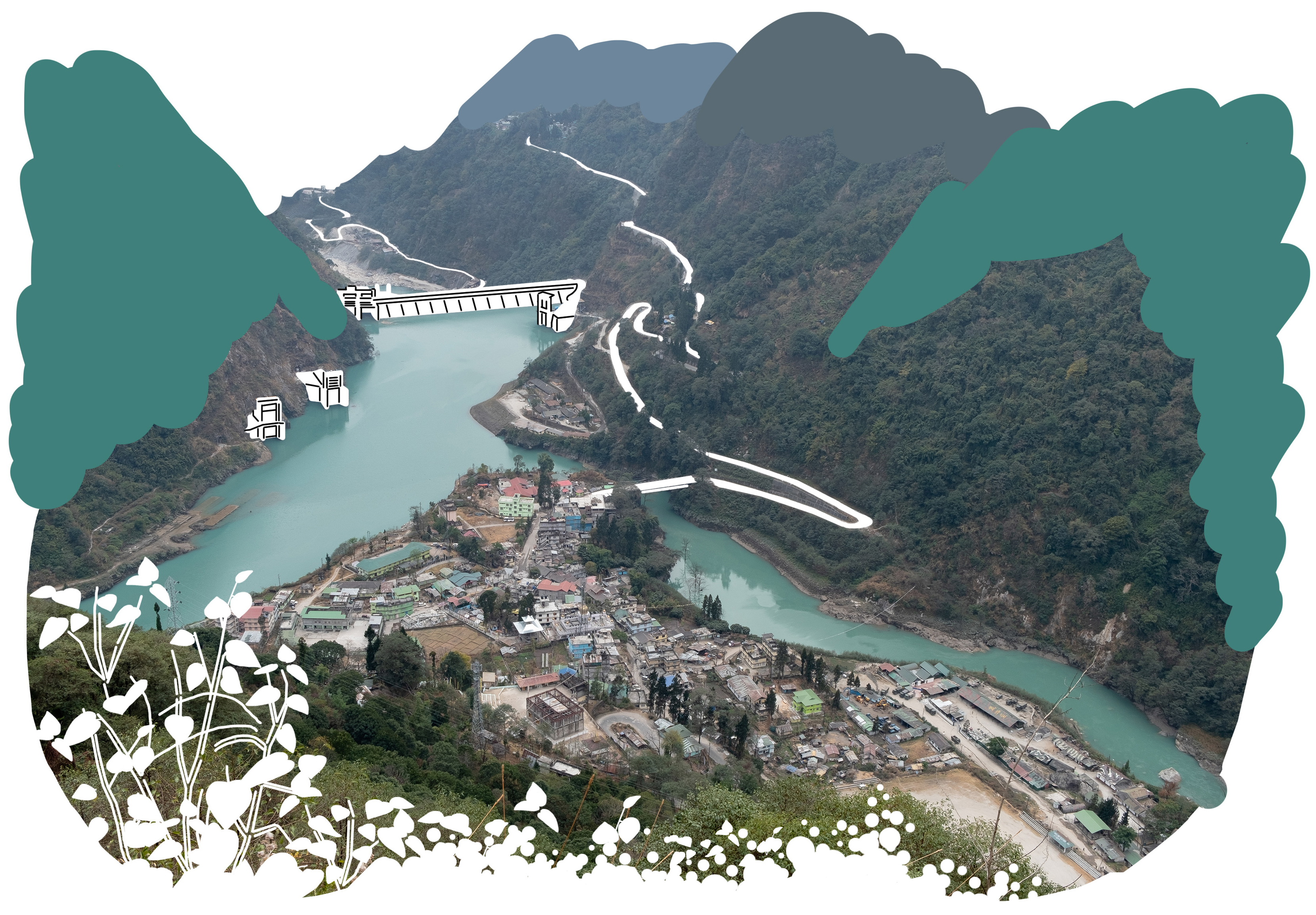 Chorabari Tal is a pool of rain- and meltwater perched high in the Indian Himalaya. Long popular with Hindu pilgrims, it has been even more of a draw since 1948, when some of Mahatma Ghandi’s ashes were immersed in its blue waters.

But in 2013, the swollen lake became a source of death and devastation when the loose surrounding glacial moraine could no longer contain it. Massive volumes of mud, rocks and water engulfed the village of Kedarnath below, killing hundreds.

Mountain people have always faced the threat of natural disasters. Landslides, avalanches and floods are familiar dangers in many high-altitude regions around the globe. But climate change is altering – and magnifying – the threats, and more and more people and infrastructure projects are standing in harm’s way.

Kedarnath fell victim to what experts call a glacial lake outburst flood, or GLOF. Increasing temperatures, melting ice and changing patterns of rain- and snowfall are swelling and destabilizing lakes in mountains from the Andes to the Alps. The sudden release of this water can destroy lives and livelihoods in communities hundreds of kilometers downstream.

Consequently, managing the risk of GLOFs is part of growing efforts to help mountain regions adapt to climate change. A project in Sikkim state, another part of India’s Himalayan arc, is a trailblazing example of how scientific knowledge and better-informed policy is protecting people on the ground. Switzerland has been at the forefront of this global initiative. The Alpine country has a long history of living with glaciers, including GLOFs, and has made helping other mountain countries such as Peru and India deal with similar hazards a priority.

For example, support from the Swiss Agency for Development and Cooperation (SDC) has enabled experts from around the world to draw up best practice guidance for the assessment of glacier and permafrost hazards in mountain regions. Published in 2017, the guidance combines future-oriented, scenario-based hazard assessment and mapping with physically based numerical models. 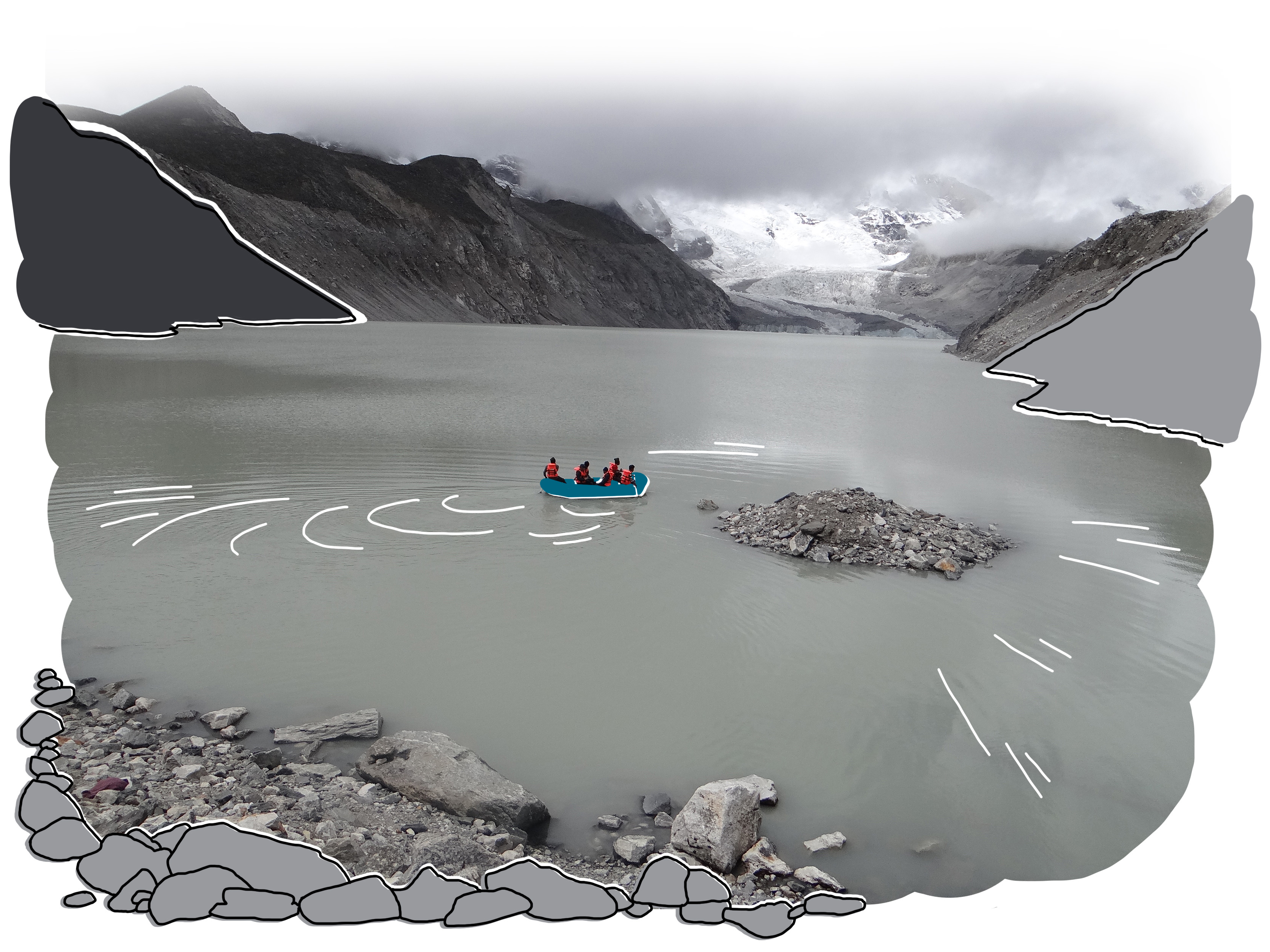 Indian scientists have surveyed some growing glacial lakes to assess the magnitude of a potential outbreak flood.
Photo: Department of Science and Technology, Government of Sikkim
© Zoï Environment Network 2022

Rich in technical detail, the document also contains user-friendly check-list tables to help local experts to consider the most important factors driving glacial and permafrost hazards in their particular location.

“These countries have a lot of experience in dealing with these problems, and typically do it well, so this is not a top-down process,” said Dr. Simon Allen, a geoscientist at the universities of Geneva and Zurich, Switzerland, who worked on the guidelines. “You need to take the best of both the local and international approaches.”

India’s National Disaster Management Authority tapped the global document to develop national guidelines on managing the risks related to GLOFs tailored to the conditions and needs of its mountain regions. An Indian expert task force brought its own thinking to bear on topics including early warning systems, emergency response, and capacity building for local communities.

The Indian guidelines are being tested in Sikkim. As part of an SDC-backed climate adaptation project, Allen and colleagues have identified more than 280 glacial lakes across the state, whose rugged beauty and remote Buddhist monasteries draw growing numbers of visitors. 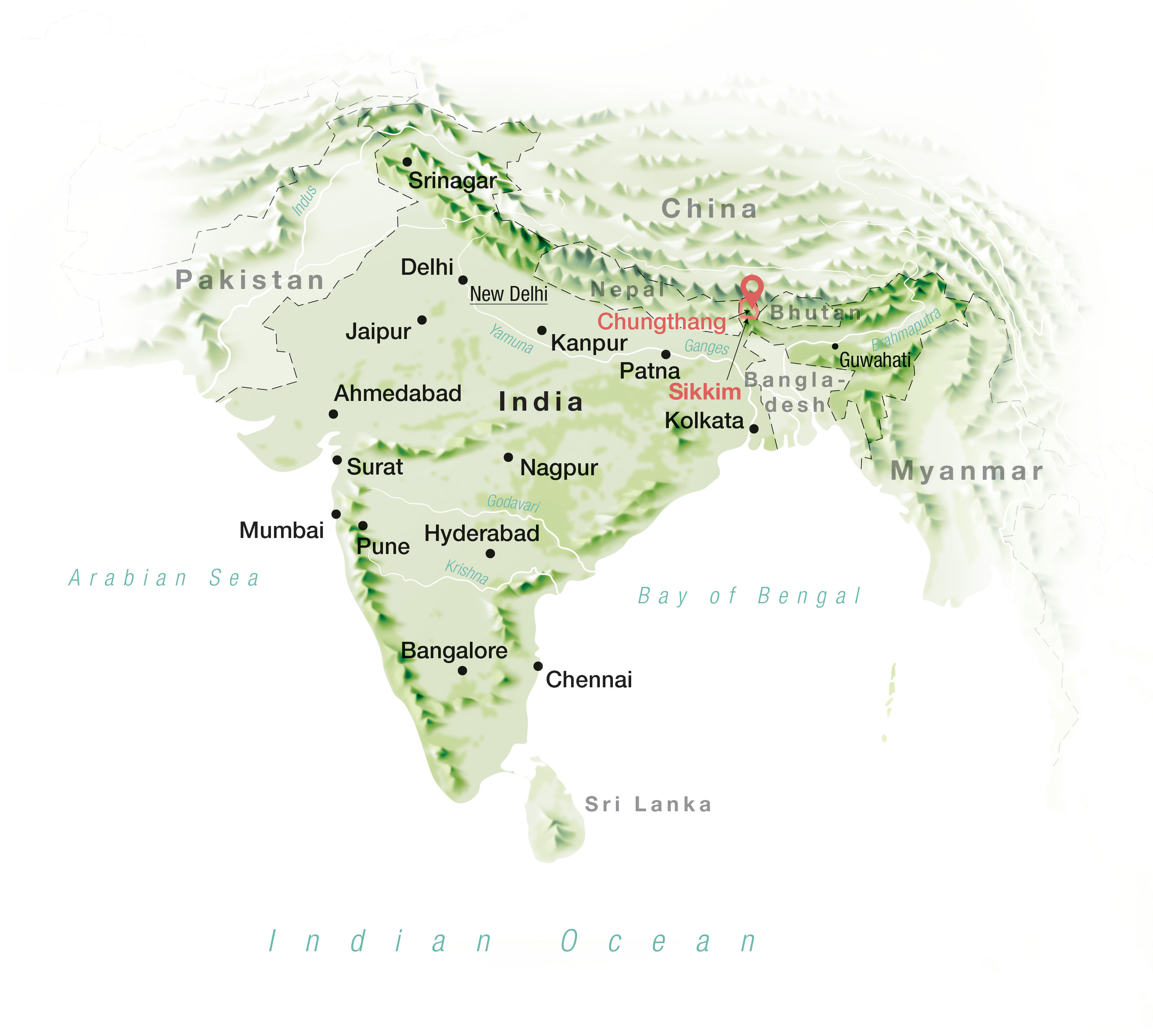 By mapping the lakes and the potential paths that outburst floods would take, along with hydropower installations, settlements, roads and farmland, the scientists have identified hotspots of risk in the high valleys. Two lakes are of particular concern, including South Lhonak, one of the largest and fastest growing.

In one modelled scenario, a rise in the level of South Lhonak lake – caused by a large rock-ice avalanche into its waters – breaches the moraine. A 30-metre-high wave of ice, water, mud and rocks roars down the valley, reaching the tourist hub of Chungthang three hours later. Here the recently constructed 1200-MW Teesta Stage III hydropower project could also be affected. Large rock-ice avalanches are the most common trigger of GLOFs across the Himalayan arc, and are likely increasing infrequency as mountain slopes thaw and destabilise in response to global warming.

“We are very vulnerable to the numerous lakes that are positioned in the north district of our state,” said Prabhakar Rai, the director of the Sikkim State Disaster Management Authority, noting that several other hydropower plants could be affected. “The glaciers are melting at a rapid pace and the lakes are increasing, so we need to be more careful.” 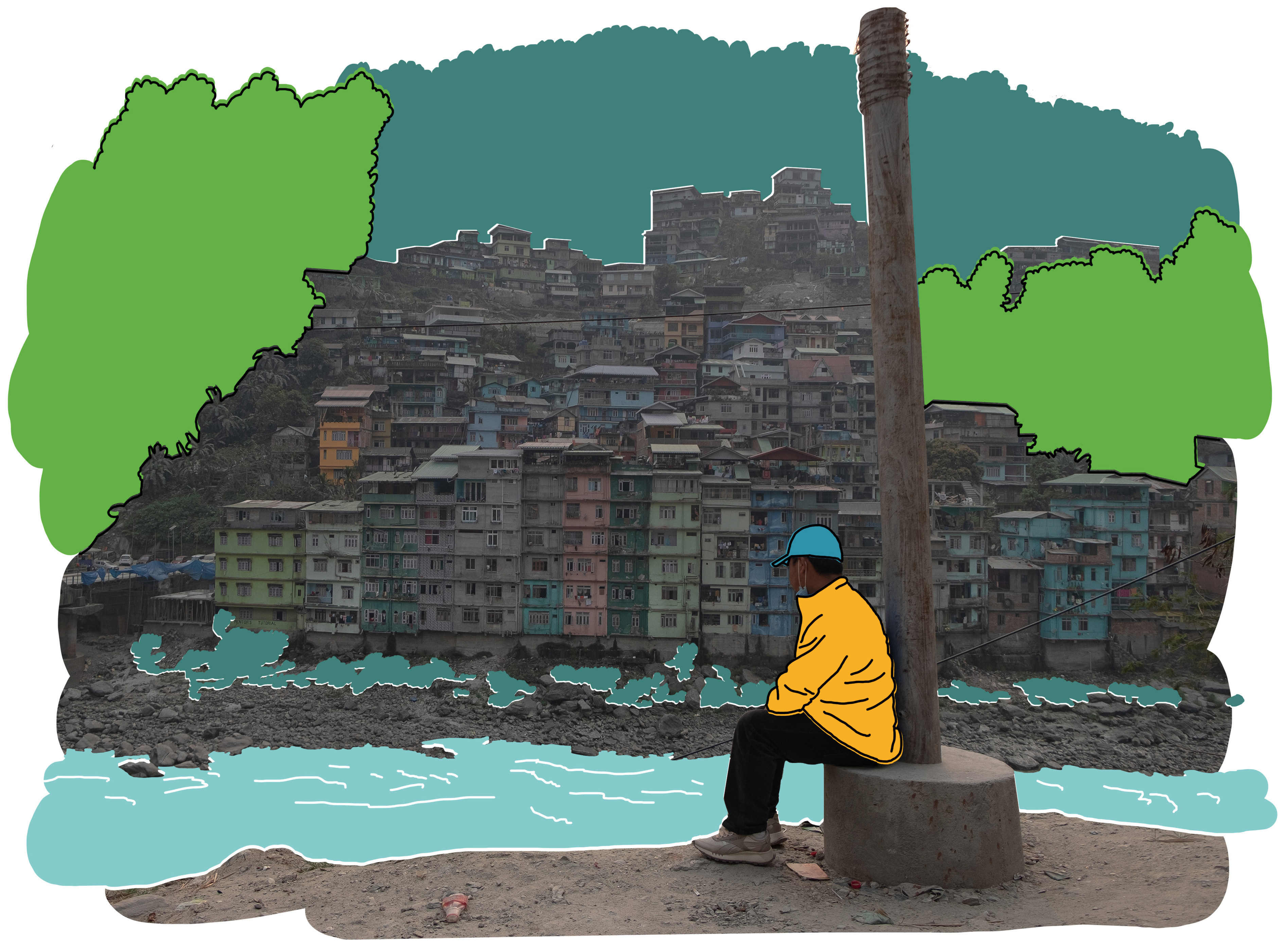 Armed with the new assessment, Rai’s team and SDC experts are designing measures that can reduce the future risk to the region’s people and economy. The plans include local community meetings and surveys to gauge perceptions and vulnerabilities, and the drawing up of detailed hazard and risk maps.

Officials are working with traditional leaders known as Dzumsa to reach out to skeptical residents and recruiting yak herders as guides for field work. “They have accepted that this is being done to save their community and their lives in future, and are ready to help,” Rai said.

An upgraded early warning system, including evacuation and emergency response plans, is also in the works. While getting people out of harm’s way is an obvious priority, Allen hopes that the risk mapping can also help spatial planners as well as individuals make long-term decisions that reduce their exposure. 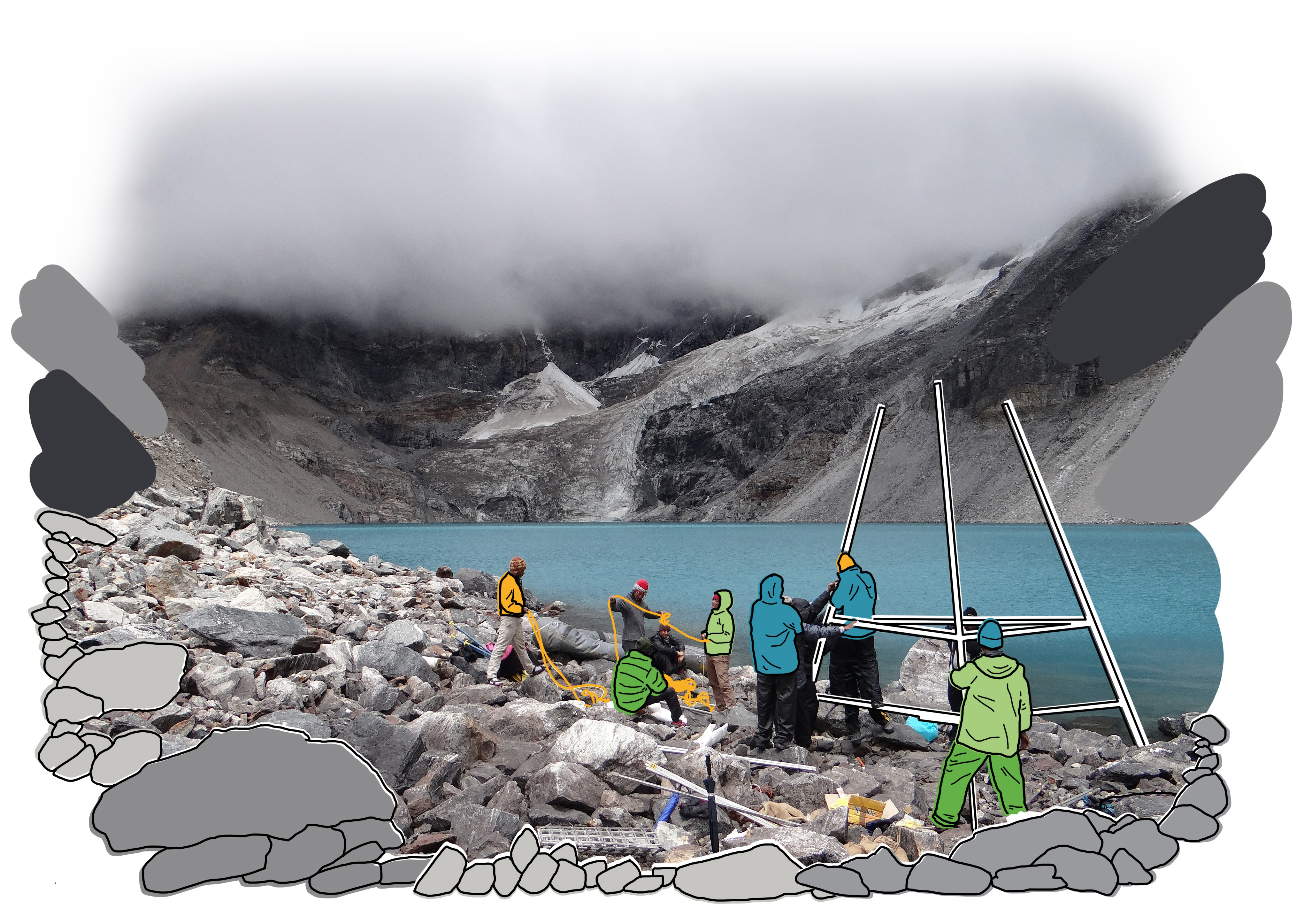 “Realizing that you are sitting in a zone that is not only exposed to a really spectacular event once every 500 years, but also to something that could happen every 20 years under future climate change, gives you a better starting point for discussions about the benefit of moving,” he said.

The national government views the project in Sikkim as a pilot for assessments and early warning systems in other mountain areas. And other countries, including several in Central Asia, are embarking on similar efforts.

“These projects are the culmination of years of international cooperation,” said Divya Sharma, Deputy Head of Cooperation at SDC in New Delhi. “The initiatives are demonstrating how state-of-the-art science can effectively feed into the design of local adaptation solutions.”

Field research and text: Written by Stephen Graham, with contributions from Simon Allen and Divya Sharma

Photos and illustrations: Original photos from the Department of Science and Technology, Government of Sikkim and Dr. Ravinder Singh, NDMA, photo artwork by Zoï Environment Network